Toronto is Buzzin For Muzzin

The Toronto Maple Leafs have extended defenseman Jake Muzzin to a 4 year, 5.6M AAV contract extension. Muzzin’s birthday is on the 21st and he will turn 31. Muzzin’s deal will expire when he is 35. The news broke right after the trade deadline passed. 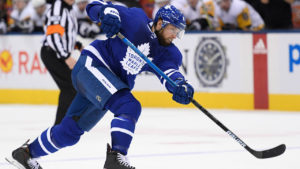 Muzzin was acquired through trade last January and has been the Leafs best defensive defenseman this year. He has great underlying numbers and has been defensively sound since he joined the Leafs. He has a solid 53 Corsi-for percentage this year under an average ice time of 22 minutes. Muzzin leads with grit, solid defensive plays, possession and great decision making.

Muzzin continues to prove defensive excellence and the Leafs hope he will be consistent through the next 4 years.