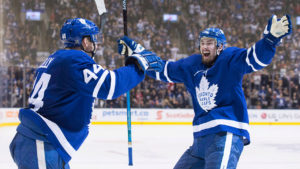 The Leafs announced Tuesday at noon that the team had agreed to terms with pending unrestricted free agent defenseman Justin Holl. An interesting bit of this is that he signed in his home state, Minnesota, where the Leafs will face the Wild tonight.

The contract comes with a 3 year term and $2M AAV. Any clauses and conditions haven’t been released yet.

Justin Holl, who will turn 28 in January, has made a name for himself with the Leafs ever since he got the chance to play this season.

After sitting out 71 games last season, Holl finds himself having a career year. Setting career highs in games played (38), assists (10), and points (11). He has also been one of, if not the best defensive defenseman for the Leafs this season.

Holl originally joined the organization in 2015, when he signed an AHL contract with the Marlies. He then went on to play 192 games with them, recording 20 goals and 48 assists for 68 points. In 46 Calder Cup playoff games, he recorded 4 goals and 12 assists for 16 points and won a title in 2018. Holl has also made one appearance in the AHL All-Star Classic, back in 2018.

Holl finds himself in a unique position, playing in the top 4 while playing under a better coach, after he sat out for so long.