The following is a submission from The Mike & Steve Talk Show regarding the Marcus Stroman trade from the Toronto Blue Jays to The New York Mets:

First off, I would like the thank the city of Toronto for something you guys did back on December 16, 2012. I’m sure you all recall when the Mets sent knuckleballer R.A. Dickey and Josh Thole to your squad in exchange for Travis d’Arnaud and Noah Syndergaard (as well as a few more pieces) and because of this trade I have been able to enjoy my Mets and their trip to the 2015 World Series.

With that said, I believe that the Mets recently returned that favor with Anthony Kay and Simeon Woods Richardson, both of whom will be a major part of your future. Now, our farm system is basically on empty, filled with older players and Tim Tebow, and you will be returning that “thank you” to us in the near future.

However, with the Mets adding Marcus Stroman to their major league roster and providing we are able to keep Syndergaard, the Mets now have one of the best five-man rotations in all of baseball. Despite the Mets record being bellow .500, they are now in a win/next-year mindset and I like it for now.

I wanted to take this New York minute to share some thoughts from the rest of the MikexSteve Show:

“The Stroman Deal is not only surprising, but it’s very confusing. Very strange that we would be buyers with the Mets being 50-55 at end of July. I feel this may be a way to ‘stick it’ to the Yanks by both the Jays and Mets! The Yanks are the one who really needed him. Only time will tell if this move makes sense, and from the Vargas deal it’s starting to make more sense! Let’s see what else happens in the next few days. This was awesome Toronto, please follow us and make us the next big thing in Canada! We’ll be right there with Nickelback, Bryan Adams, and Avril Levine!” 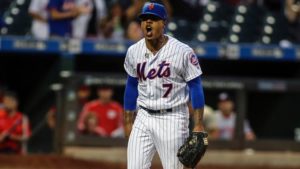 A word from our intern Ryan:

“[The Stroman deal] shows this team thinks it can win now. This puts the Mets rotation in the Top 5 in MLB. I haven’t seen the fan base this split in a long time. Love it or hate it, this front office isn’t afraid to make a splash. They have a year and a half to make this trade worth it. Will the GM be a genius or a buffoon? History will decide.”

Our slogan is “You Gotta Give Us a Shot” and we would love for all you sports fans to do so. Follow MikexSteve on Facebook and visit us at www.mikexsteve.com

Thank-you for your submission, guys!!!