I would like to say first off, that I don’t want you to read this looking at me as a “general Steelers fan”. I have been watching this team since I began watching the NFL in 1993 (I know you’ve been around a lot longer than I have) and have always been a Steelers fan since day 1. I follow our team very closely throughout the week and never miss a game. I don’t react to things based on 1 or 2 games, but instead, season to season. 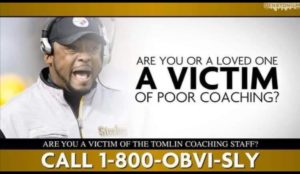 Here are a few thoughts of mine:

There are absolutely no more excuses for this guy. He is an atrocious, pathetic, no common sense having coach. Both on and off the field.

For you, and other people in the media to continuously defend him, makes me absolutely sick to my Canadian stomach.

Don’t get me wrong, I have no opinion of the man personally. I’m sure he’s a great husband, father, son, etc. But from an NFL coaching perspective, he needs to be gone from this team and frankly probably out of the league.

Last night was a disgrace to watch this team and yes, I do put ALL of the blame on him. 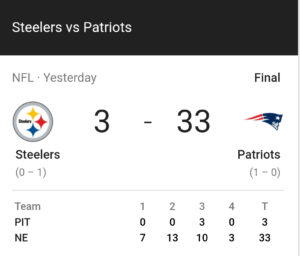 Let’s start with us being down 10-0 and having a 4th and inches around our own 30 yard line. Granted, if we don’t convert it the Pats are already in Field Goal position…big deal (we can’t stop them when they start from their own 25 anyways). You have a 6 foot 5 QB and if he sneaks it, the probability of converting is higher than not. Tomlin decides to punt…great call coach!

2:00 warning of the 1st half, I believe we’re down 17-0 at this point and we have a 4th and 1 in NE territory. Trying to get a score so we can carry some momentum in the 2nd half where we get the ball first. We line up to go for it with James Conner behind Big Ben, timeout is called. We talk it over and come out with 5 wide and Ben is in the shotgun. REALLY COACH??? So you’re just going to give away to the Pats that you’re throwing the football, with no illusion of even considering running here? Great call coach! (And don’t put this on Ben or Fichtner, cause Tomlin can override either of them if he had a pair between his legs).

Then we get the best of all night, an absolute classic. 4th and 1 at the Pats 1 yard line down 20-0 and we send out Chris Boswell??? You are just full of great decision making tonight Mike! Post game press conference you say you wanted some positivity…ok coach, how about you positively walk your ass to the unemployment line.

You notice this is just the offense I’m talking about here right? Let’s move to the Defence for a second:

How many times am I going to see Tom Brady play action fake and throw that quick pass to Julian Edelman before making an adjustment? How about NEVER MAKING ADJUSTMENTS! Brady has killed everyone, but especially us, with that play over the years. 2 seasons ago it was Gronk in Pittsburgh, now Edelman. By now, you would think Tomlin would have it figured out.

It was actually nice to see us send more than 4 pass rushers to Brady after 54 mins of play. I might be wrong about this, but with 6 mins to play in the 4th, we finally decide to rush 5 or more guys….and what happened? Low and behold Brady was rushed and threw 2 incomplete passes to force a punt or FG (Can’t remember which). Again, don’t blame Keith Butler (who I can’t stand by the way) cause Tomlin can override him as well.

There is a terrible and very disturbing trend here and I’m surprised you don’t see it as well along with the Rooney’s and Kevin Colbert. This doesn’t just happen with New England, Mike Tomlin constantly makes poor in week and in game decisions to cost us football games. Do I need to get into flying us out so late during the week to the West Coast when we play out there? I’m not saying that adjusting to the time zone is the reason we can’t win in Oakland, Denver, Seattle etc. All I’m saying is flying out late during the week to the West Coast is the reason we can’t win:) Can’t wait to see what’s in store for us in a couple of weeks up in San Francisco lol. Have a feeling Pornstar Jimmy G is gonna have a field day with us while we’re still waking up. Don’t get me started on the London game years back against the Vikings…ugh. Think we flew out on Saturday morning for a Sunday game there LOL.

Do you remember two seasons ago when we needed the Wizard of Boz’s foot to win 5-6 games at the buzzer? Against an Aaron Rodgersless Packers team at Heinz Field on SNF? How about when we went to Indy that season, and played an Andrew Luckless Colts team and barely won?? Or the Ryan Shazier injury game in Cincy and needed to climb out of a 17-0 hole at halftime when we had AB and L Bell???

How many times do you see NE and Belichick struggle with teams they are supposed to beat? They’re usually being accused of running up the score on teams.

Maybe comparing us to the Pats isn’t fair, but you know what, in the last 2 decades I would say we are their biggest rival and that’s why I do it. I can handle losing, but not the way we do every single time we go to Gillette. When the Pats come play us at Heinz, we can barely squeak out a win, if that. When we go there, the game is practically over by the time the coin lands on the turf.

This is not a personnel issue with our team, it is strictly a coaching issue. What are the 2 constants in New England over the last decade??? (For the record the Pats make me sick and I can’t stand them, but there is no denying they have been the best). A HOF coach and HOF QB. We have a HOF QB and a terrible Head Coach.

We have had stars and couldn’t even get to the SB. The Pats seem like they bring on WalMart cashiers, plug them in on offence and defense and they get to another SB. It’s frankly embarrassing. Our scheme, system and game plans are downright pathetic. Our lack of preparation is comical. Terry Bradshaw and James Harrison among others have been right all along about him, but it’s just too bad that Management can’t see this. We reward this guy with an extension? Really??? I say fire him now and pay him what he’s owed. There’s a local Pittsburgh guy named Mike McCarthy sitting around right now that I’m sure would love the opportunity to coach this team. Not guaranteeing it works but for goodness sake let’s try something different man. How about a call to good old Bill Cowher???

I have never been more embarrassed to be a Steelers fan then I was last night and even more today.

Tomlin has no control of his locker room as he doesn’t lay down the law and tell players when they first walk through the door, what the standard and expectations are.

But what bothers me the most, is his on field decision making, lack of adjustments, timeout usage and maybe worst of all his challenges lol. Now that is laughable out loud worthy. Thankfully, hell has frozen over and he’s decided to finally bring in a replay guy this season. Only took 12 seasons!

I told my Steeler friends all off season, we did the right thing by getting rid of the 2 knuckleheads…but there is one more to go. OUR Pittsburgh Steelers will NEVER EVER win anything with Tomlin at the helm. It’s just not going to happen.

One pissed off at Mike Tomlin (Canadian) Steelers fan!!!