The NHL announced the 2020 NHL All Star rosters of each division on Monday. Unfamiliar names were selected like Detroit’s Tyler Bertuzzi and Ottawa’s Anthony Duclair. However, for the Leafs, familiar names held near our hearts were named. Forward Auston Matthews and Goalie Frederik Andersen. 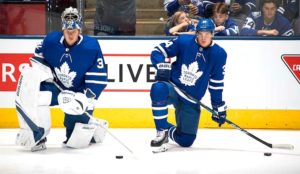 Auston Matthews, who will play in his 4th All Star game doesn’t come at a surprise because he is having arguably his best season in the NHL and he has been voted in ever since he broke into the NHL. Matthews having 10 goals and 15 points in his last 10 games is nothing but all star worthy and spectacular. The Leafs hope to have him healthy all season as he hasn’t played a full 82 games since his rookie year in the 2016-17 season.

Frederik Andersen, who has been the Leafs’ MVP ever since he joined the team has finally been given the recognition he deserves and will play in his first NHL All Star game alongside rival netminder Tuuka Rask of the Boston Bruins.

Andersen, who is tied with St. Louis’ Jordan Binnington for 1st in wins has the 2nd most saves while being 3rd in ice time. It’s safe to say Andersen has been an elite and underrated goalie in the NHL for some time now.

Every team has one more player that can be voted in. On New Year’s Day, votes will be taken for the Last Man vote. The Leafs’ candidate is Mitch Marner.