With the flu bug going around, teams become more prone to losing players for a few games, or in more extreme cases, longer. Fortunately, the Leafs haven’t dealt with the flu bug yet, but they do have some setbacks of their own. 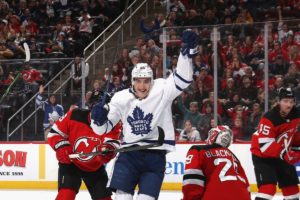 Ilya Mikheyev, the rookie Russian who has been given more time on the top 6 and next to John Tavares, had to leave Friday night’s game against the Devils after suffering from a laceration on his right wrist which severed an artery and tendons in the wrist.

After the game, he did not travel back to Toronto with the team. He stayed in a hospital in New Jersey which then he had surgery to repair his wrist. According to the team, he will miss 2-3 months and then will be evaluated again.

On Saturday night (December 28), before their game against the New York Rangers, the team announced that defenseman Jake Muzzin would be out week-to-week with a broken foot. It was apparent to some fans and Leafs followers that Muzzin seemed to be harbouring an injury while playing. Now, it might have stopped Muzzin from being able to play.

The Leafs have been calling up Marlies as emergency fill ins recently. One of them, Adam Brooks, who played his first NHL game on Saturday, he looked very good and confident.
Another name is 2017 first round prospect Timothy Liljegren who has been sent up and down for the past week. I’d really like to see him play soon, scratching Marincin wouldn’t hurt at all.
Finally, Kenny Agostino, who split the season with Montreal and New Jersey last year will most likely fill in for Dmytro Timashov if the Leafs intend to play him.

The Leafs are currently 2nd in the Atlantic and 8 points behind the Boston Bruins who are first. They will face the struggling Minnesota Wild on Tuesday night to get a win, after losing at home against the Rangers in overtime.