Home > News > Uncategorized > Leafs Continue To Be Haunted With Injuries

Leafs Continue To Be Haunted With Injuries

The Leafs announced that defenseman Morgan Rielly would be sidelined for 8 weeks after fracturing his foot.

Rielly, 25, has been the Leafs best overall defenseman since he was drafted and joined the big leagues. He came off a career year last year, putting up 72 points, and setting or breaking records left and right.

Rielly had started this season at a good pace, scoring 5 points in 6 games. However, his season kept going downhill as he only scored 21 points in his remaining 40 games of the season before being forced off the ice with this injury. 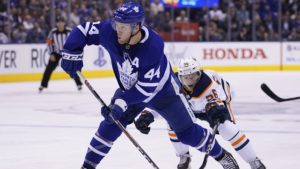 Fans had noticed that Rielly looked incredibly slower this season compared to last season. Not only slower but unwatchable when playing defense. Rielly would consistently make mistakes or turnovers which would lead to goals against or opposing scoring chances. Rielly had also slowly stopped breaking out of the defensive zone to start a rush like he normally would last season. Fans started to speculate he was harboring an injury, and obviously, they were right.

Rielly revealed after the game against Edmonton, where he was caught 1 on 1 against arguably the best player in the world, Connor McDavid, that he had been dealing with a lower-body injury since the start of the season. He had all the necessary tests and physicals but nothing was serious, so he continued to play.

Rielly will be re-evaluated in 8 weeks, just before the start of the playoffs. If everything goes well through the 8 week recovery period, he will be back with the team to start the playoffs.