Barb Underhill, a former decorated Canadian figure skater, who is now the Leafs’ Skating Consultant has been training young prospects of the Leafs ever since 2012 and she has been doing a great job. Her prodigies and graduates such as recent call ups Pierre Engvall, Adam Brooks and Mason Marchment prove her abilities. She also trains current Maple Leafs to help them become better skaters. John Tavares, the Leafs’ Captain, would be a great example. If you’ve watched him play this season, he looks faster, more agile, and has better edges. 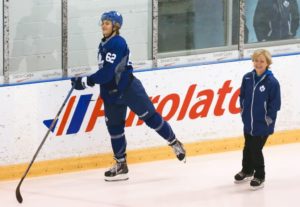 Barb Underhill originally started developing players back in 2006, when she joined the Guelph Storm of the OHL. She then started to work with NHL teams. First the Anaheim Ducks, then the New York Rangers and finally the Tampa Bay Lightning.

On April 20 2012, the Leafs announced that they had hired Barb Underhill as their Skating Consultant for their development program. Barb would then go on to train many Leaf prospects, some later on became Maple Leafs.

The Leafs and Leafs fans remain hopeful that Barb stays with the team and continues to help prospects make the jump to the NHL.